The 2,000 best contestants who have solved at least one problem will advance to the elimination stage. Already advanced from test round participants will have a chance to work with the TCM/Time.

Good luck! Almost 200 t-shirts and more than half a million rubles are waiting for you!

Link to the contest

Archive of Yandex.Algorithm Test Round

Results of the test round are now official and here is the list of advancers:

June 27 is an important date – that’s when the test round of Yandex.Algorithm kicks off. Don’t miss your chance to register, so you can be in the running for a place in the final round, which takes place on August 21–23, 2013 in St. Petersburg. The final round venue is truly unusual for such an IT event – the palace of Grand Duke Vladimir, built in 1870, will welcome finalists with all its historical charm. 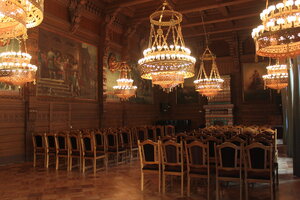 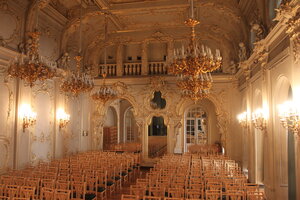 In the final round, the best participants will be left one-on-one with the testing system – no internet connection or prewritten code, only properly set-up computers and IDEs. We will provide text coverage of the round.

If you want to be part of the action, don’t leave your registration to the last minute – remember, the test round starts tomorrow.

UPD: The test round is available for participants via this link.

Current standings are open for everyone here.

In 2013 Yandex will host an open programming championship on the new Yandex.Contest system, with original rules, prizes, monetary awards and an exciting final round in St. Petersburg, Russia. But the most important part will be great problem sets, made by Belarusian, Japanese and Polish problem setters. Registration opens on May 30. Full information about the schedule of events is available on the Schedule webpage

Specifics of the tournament

Yandex.Algorithm 2013 will be scored using the TCM/Time system and consists of six rounds: test, qualification, three elimination and final rounds. The final will be held on August 21–23, with the main event taking place in St. Petersburg’s Vladimir Palace. Each round will last 100 minutes and include a set of algorithmic problems. The test round will give you an opportunity to try out the new Yandex.Contest system and familiarise yourself with the TCM/Time system. Two hundred and fifty participants will qualify from the test round directly to the elimination stage of the contest. All who have registered for the Yandex.Algorithm competition can take part in the qualification round. The 2,000 best contestants who have solved at least one problem will advance to the elimination stage.

The elimination stage consists of three rounds, with each round starting at a different time to give contestants from each time zone the opportunity to choose a comfortable participation time. A complex advancing system will determine the best of the best. 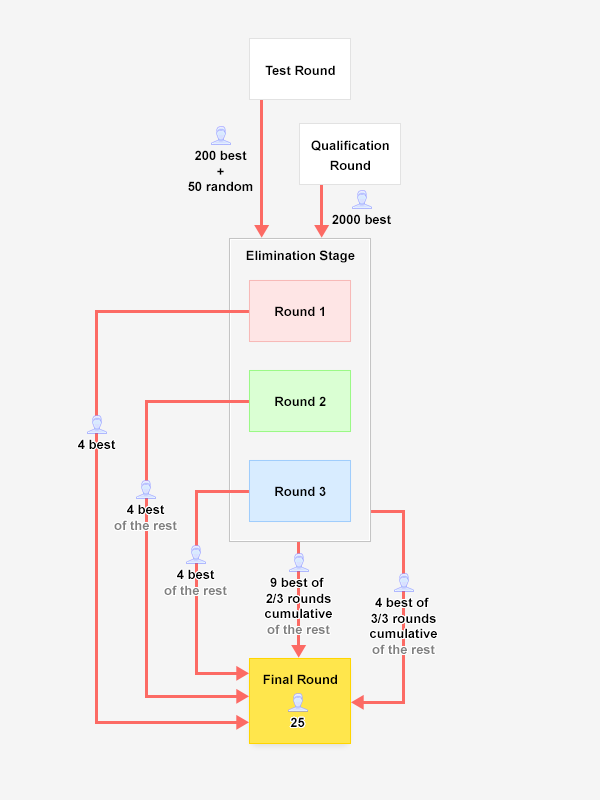 Participants of the elimination stage earn score points based on their performance in each elimination round according to the Grand Prix 30 system. You can read the full description of the system on the Rules webpage

The Grand Prix 30 system allows the finalists to include not only the top participants of each round, but also stable performers who have participated in multiple rounds.

TCM/Time rules are similar to ICPC rules with the difference of “blind” submissions. Upon submission, blindly submitted solutions are tested only on a sample test set, and the overall result on the problem is shown only after the end of the contest. There is a bonus for the risk – successful blind submissions will subtract penalty time based on the number of contestants who have solved the given problem. As a result, total penalty time can even be negative! You can read the full description of the TCM/Time system on the Rules webpage. Read them carefully.

The testing system supports the following list of compilers:

More information is available on the Compiler settings webpage

The final will take place on August 21–23 in St. Petersburg, Russia, in the former palace of Grand Duke Vladimir, built in 1870 on the Neva River embankment near the Hermitage museum. In the palace halls there is a significant collection of Russian paintings as well as the library of Emperor Alexander II.

The top 3 finalists will gain 300,000, 150,000 and 90,000 rubles respectively. All 25 finalists and top 75 participants based on the cumulative score of the elimination stage will receive a Yandex.Algorithm 2013 T-shirt. Take part in the contest and win! Good luck!